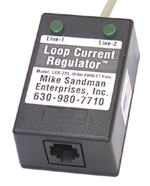 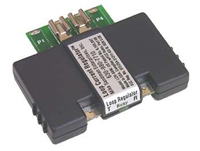 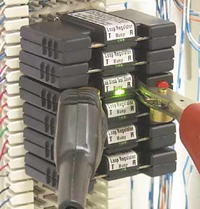 Loop Current is the amount of electrical energy flowing through the telephone and line, as opposed to the voltage which is the force behind the energy. There is a definite correlation between the Loop Current and Line Voltage (Ohm's Law), but the loop current reading is often what indicates the problems in telephony... not the voltage reading. The carbon transmitter used in telephones has been the controlling factor for years, since it needs over 20ma to sound good.

I've also been told that depending on the value of the load coil (they come in different inductance values), the last load coil should be at least a couple of thousand feet from the premise.

In some cases, the Phone Company screws up and there's a misplaced load coil on the pair, either too close to the premise, too close to the CO, or not needed at all. Although everything is computerized, a lot of the plant records indicating which pairs have had load coils put on them in the past are incorrect. That means that when someone gives up a line that needed a load coil, and the pair is re-used, the Phone Company might not know the load coil is on that pair, and it could create a problem on the new phone line that pair is used for. Mis-placed load coils will change the impedance of the line and could even make it too loud, which can distort both voice and DTMF digits (causing voicemail DTMF recognition problems).

A special TDR (Time Domain Reflectometer) can see the load coils on a phone line, and pinpoint the exact number of feet from the premise. If you're having strange problems, especially with DTMF recognition, it's not a bad idea to ask the phone company to check the line for mis-placed load coils. Most TDRs can see out to the first load coil on a line. A special TDR (more expensive) can see out to 5 or more load coils.

If you want to know the location of a Central Office, the type of CO, who owns the CO, or even how far the premise is from the local CO, click to see our Central Office (CO) Info Lookup page to get the address of the CO, and use the Map It! button figure out the distance between the two addresses.

Phones Companies use another piece of equipment that causes strange problems... Pair Gain Equipment. Phone companies today have little or no interest in putting more copper in the ground. If a premise has a six pair going to it from the nearest pedestal, and the subscriber needs seven lines, the Phone Company has two choices, bury more copper cable, or use an electronic gizmo to get two lines from one of the existing pairs.

A voice T1 is simply pair gain equipment, getting 24 lines from one or two pairs of copper. A T1 is expensive because the signal needs to be repeated every 6,000 feet. In the case of a lack of facilities (copper) to a particular building, the copper pairs usually aren't going very far from the pedestal or pole to the premise, and they usually don't need to very many lines, so some fairly inexpensive electronics can split a single pair of copper into two or more lines.

The problem with pair gain equipment is that it sometimes does a crummy job of emulating a real phone line. This stems from the old telephone company philosophy (excuse) that they will only guarantee that a line works with a regular 2500 set, and a 9600 baud modem. The reality of the world is that there are almost no 2500 sets connected to any Phone Company's lines, and almost nobody that wants their modem to connect at a slow 9600 baud. But they don't care. They don't have to. It's your job to make your system work with whatever lines they provide.

Some pair gain systems are known for putting out noise (common mode noise that you can't hear, but that's fixed with our Modem Filter ), having problems with Caller ID, or various other problems - especially with high speed data (they usually won't pass anything over 24K). Reading the loop current and voltages on the line might point out where the problems are. In some cases, you may be able to get the phone company to switch the pair gain equipment to a different set of lines, if your customer is using a particular line for a special application (like a fax, modem, etc.). The Phone Company won't tell you that they're going to put pair gain on a line. You find out when there are problems, usually after adding a new line, and the readings you take on a couple of lines look different than the other lines.

The Phone Company may put pair gain on one or more lines without telling the subscriber, and with no new orders for the subscriber. There may be a new tenant moving into the building, and they're out of pairs, so they put the pair gain equipment on an existing tenant's pairs in order to give service to the new tenant. You have absolutely no control over that, and can't complain about it. The Phone Company can do whatever they want to get dial tone to the NI.

CLECs make it very difficult to get problems resolved on telephone lines. They often use the LEC's copper, so they have little or no control over what happens, and often won't offer the same level of service as the LEC. Most won't offer a trunk, which is conditioned better than a line, and can fix strange problems (see the Primer on Telephone Line Audio, below). 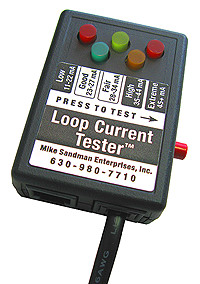 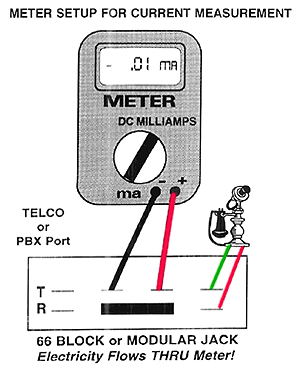 Measuring the loop current is easy. Our Loop Current Tester is the easiest way to test. Just plug it into a modular jack on the line (not in-series), push the button, and read the loop current off the LEDs.

Otherwise, you can use a good quality DIGITAL volt-ohmmeter with a DC milliamp scale. An analog meter, except one designed for telephone work, will usually not give you accurate readings. A Fluke, or a few of the Radio Shack meters will do OK - within a couple of ma. Our Network Meter will display loop current, as well as AC and DC Voltages. The connection diagram for a meter (above) shows the meter in-series with the telephone instrument or system. That will give you the most accurate reading with a meter, since it's going through a 600 or 900 ohm instrument (or Butt-set).

As an alternative to connecting the meter in-series with the instrument, you can just short the pair with your meter leads in the ma mode, and read the direct loop current, which will probably be a couple of ma higher than the reading through a phone, but it might get you close enough to make a decision on what to do.

If you don't use our Loop Current Regulator or Attenuator, and try to use resistors to bring the current down, you really need to watch the db loss as you increase the resistance, so you don't get it too low to hear properly. Try to stay above -7db. Below that you'll have a hard time hearing on long distance calls. Generally speaking, for every 100 ohms you put in-series with the tip and ring (you have to keep the line balanced and put the same value resistor on both sides of the line), you'll drop the loop current by 1ma, and the circuit loss by 1db. That means if you want to get down to 30ma from 35ma using 500 ohm resistors, you'll lower the volume of the line by 5db - and you probably won't be able to hear well. Both the Loop Current Regulators and Loop Current Attenuators have special circuitry that lowers the loop current without lowering the db level. I'll talk about measuring db loss a little later.

As I said before, to measure loop current with a regular meter, you need the meter in-series with the telephone line and telephone. To measure voltage, whether the DC line voltage or the AC audio voltage, you need the meter in parallel (across) the telephone line. You don't want to make a mistake in your hook-up as the readings would be meaningless (and could cause you to take an expensive improper action). Make sure you meter is set on DC ma, not AC ma!

To hookup a regular meter to measure loop current in-series: If you have bridging clips on a 66 block, just open one of them, and connect one lead of the meter towards the CO, and the other towards the equipment. It doesn't matter which color lead goes where since the meter will display a + or - that you don't care about (except on an analog meter which will make the needle go backwards and get damaged).

With the line on-hook, you should see almost no current flowing through the meter (it will read maybe .01ma). When you go off-hook with either the phone equipment, modem, or your butt set, you should get a reading of between 23 and 35ma if the line is OK. Repeat and record the readings for each line, since not all of the lines have loop current problems in many cases.