Do you put lightning protection on your systems, or wait for damage, then add protectors?

The answer to including lightning protection on new systems isn't all that straight forward.

I worked for a large Interconnect in Michigan for a while. They covered most of the state, including branches in northern more rural areas where lightning was quite common.

Before I started working for that company I automatically included the best Lightning Protection and AC Surge Protector I could get in every proposal, for all the trunks and any OPXs (Off Premise Extensions) leaving the building.

Then the president of the Michigan company mentioned to me that they normally offer lightning protection on every proposal, but they didn't push the customer to take it - and their competition often didn't even mention lightning protection, so it usually didn't go on new phone systems they installed.

That was shocking to me, until he told me that one lightning storm was like having two more good salesmen selling new phone systems.

The company stocked equipment at most branches at levels that would get systems back up and running pretty quickly after a lightning hit. They made quite a bit of money on service calls to replace stuff hit by lightning. Most manufacturers won't even try to repair electronics hit by lightning since so many components get wiped out that troubleshooting is way too time consuming.

Sometimes it took a while to get paid for the parts and service call. Labor was often on nights and weekends at a premium rate, and full new prices were charged on the parts. Much more than the proposal listed for the costs for MACs (Moves and Changes) for X years that went along with a maintenance contract.

A lot of companies don't have insurance coverage on their phone system or computers for damage from lightning, surges or water damage from a leaky roof. That often requires extra Electronic Equipment Coverage (EEC) on the policy at an extra premium. A lot of the customers didn't find out about EEC Coverage until after something happened.

There are definitely two ways to look at how you handle Lightning and Surge Protection!

I've done lots of service calls to repair surge and lightning damage. I witnessed the chaos that comes from having a phone system and computers knocked out at a company. When we decided to manufacture Lightning Protectors about 15 years ago, we made what I consider the best Lightning Protection out there. We call it MLP... Maximum Lightning Protection. 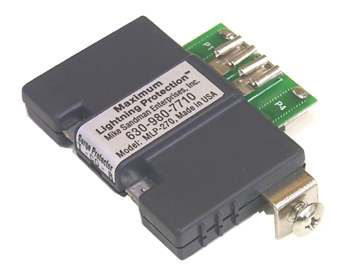 MLP Lightning Protector that goes on a 66 Block


We make them for a 66 Block, with a terminal strip for direct wiring, and a modular version for POTS lines and station ports.

The components we use are beefier than anything else out there. We make them in a number of low voltage ranges (for audio, data and digital phones), as well as regular POTS lines and Station Ports, T1, T3 and Ethernet. Any pairs going outside of a building that don't have lightning protection on them can bring the surges into the phone system and cause damage if they're not protected properly.

There aren't many companies relying on special T1 Lightning Protectors for their T1 lines. The phone company uses regular twisted pairs from the demarc, which has either carbon or gas-tube protection that won't protect a T1 Smart Jack much. It turns out that the Smart Jack, which the phone company provides, is used as lightning protection for the phone system or other equipment that the T1 is going to. Most companies think that's OK since the phone company will replace the Smart Jack for free, until they have to deal with the down time of up to 24 T1 (or 23 PRI) phone lines, or their data connection out of service. By the second or third Smart Jack that acted as a Lightning Protector, they're calling us.

The protection that the phone company uses on CO lines going into a building are either carbon or gas-tube. These react slowly to surges, and don't protect the electronics in phone equipment very well. They were originally intended to prevent a subscriber from getting fried while talking during a lightning storm, and to prevent wooden houses from burning down from lightning brought into the house on primitive telephone wiring.

Our Protectors are "Dual Stage"... Self Resetting Over Voltage and Over Current protection.

Over Voltage protection uses electronic components to take any surge over a certain voltage (like 270V for a POTS line) and send it to ground. Any lightning protection needs a good ground, or it won't do anything. The second stage of protection, Over Current, consists of self resetting electronic fuses which open at 150ma. When the current comes back down the electronic fuse self resets.

In the old days some manufacturers used "Sneak Fuses" to protect a line from high current. They always needed to be manually replaced after taking a hit. Today, service calls are way too expensive to use a technician to replace a $5 fuse after a storm.

Over the last 15 years we've only had one report of our Lightning Protector not saving the equipment. It was at a radio station on a mountain top. They sent the Protector back and there was no damage to it. There apparently wasn't a good ground going to the Protector. Without the ground the surge goes right through the electronic components to the device you want to protect. With the good ground as soon as the voltage gets to the protection value of the Protector, the surge is redirected through the electronic components to ground, and the surge doesn't get to the equipment being protected.

If you use a Protector rated for less voltage than is on the phone line it will always be shorted to ground, and the line will be dead. An example would be using a Protector made for 50V on a real phone line with 48V talk battery. It will work just fine on outgoing calls, but when the 90V ring voltage comes in it will short the line to ground immediately - which answers the line and stops the ringing. The Protector will self reset, ready for the next outgoing call, or to divert the next ring to ground on an incoming call - starting the cycle over.

There are some lightning and surge protectors out there that use MOVs (Metal Oxide Varistors) to short the line to ground, rather than modern electronic components. MOVs are known to eventually break-down and start shorting, in this case to ground, at lower and lower voltages. That causes the line to short-out until a technician replaces the Protector.

The failure mode for our MLP Protectors is to short to ground when it blows up from something close to a direct hit, or a direct hit. At that point it will never self reset since it's likely a smelly hunk of melted plastic - but it did save the equipment by failing shorted to ground.

There is protection for POTS lines that will 100% guarantee that the equipment behind it will never be damaged no matter what, good ground or not. These devices have a short piece of fiber optics between the input and output. Since lightning will never travel over the short piece of fiber, the equipment inside the building can't be damaged by surges. But, while you can get a POTS line or analog station port to go between the input and output, they generally don't pass some types of message waiting and Caller ID, or CPC (Calling Party Control) disconnect. Because the fiber device is locally powered there is a possibility that the electronics in the device itself will be blown up by the lightning, and the line will go dead to the equipment inside. It will protect the equipment, but if it's blown up it won't reset automatically - and the equipment it's protecting will be dead until it's repaired.

The biggest users of fiber optic protection devices are power plants, where the AC voltage induced into the phone lines coming into the building can prevent phone equipment from working - and severely shock anybody working on the telephone wiring. For worker safety phone companies have a limit for induced AC on a line of 50VAC, since anything more than that could shock a phone man working on the pair. While something under 50VAC induced onto a phone line might be safe for a technician, modern electronic phone equipment seldom works correctly when there's over .5VAC (half a volt) on the line (normally measured from tip to ground and ring to ground).

It would be impossible to use a normal protector made for a POTS line at a power station since there could be 500VAC induced onto that pair from outside. The 500V would never get into the building if there was a 270V protector on the pair - because the line would always be shorted to ground by the 500V on it.

Click HERE to see our Grounding Tech Bulletin , which explains why what looks like a good ground could be almost no ground at all

Click HERE to see our Longitudinal Imbalance Tech Bulletin , which explains induced AC voltage problem testing - and how to fix it