You need a good ground both for the operation of telephone and computer equipment,
as well as to prevent damage from surges over the power, phone and data lines...

For voice and data we manufacture what we call Maximum Lightning Protection (MLP) surge protectors.  Unfortunately most of our customers buy them after their stuff has blown up.


In a nutshell a modern voice and data lighting protector has two stages of protection:

Since most damage is caused by high voltage, which a protector sends to ground, if you don't have a good ground you don't have lightning protection - even if you bought the best you could find (ours!).

In a place like Chicago where there is ordinary dirt almost everywhere a good ground is pretty easy to get. The electrician drives an 8 foot ground rod into the dirt right outside where the main circuit-breaker panel is and runs a heavy gauge wire from the ground rod to the metal box for the panel.

The ground is then carried to all the outlets in the building through the conduit attached to the metal circuit-breaker box, through the green ground wire put in most conduits (usually not for light switches), and on the ground wire in Romex when the local authorities don't require conduit.

Sometimes the electrician forgets to attach the big gauge wire to the ground rod or to the metal box inside. If you're not sure, it's worth going to look for your ground rod to see if the wire (or big braided wire) is attached - or just hanging loose?

The real problem comes when the earth around a building isn't just plain dirt .  If it's rocks, gravel, sand or clay, those materials don't conduct electricity as well as nice moist dirt - and you have a bad ground.

Sometimes the best way to find a grounding expert in your area is to ask the chief engineer at a local radio station. They need a really good ground for their antenna and may know a local expert.

If you have rocky or sandy soil, the ground is just as important for protecting the AC to your equipment as it is to the telephone lighting protectors.

For lightning protection you want as short a ground wire as possible from the electrical panel to your surge protectors. You want to make as few turns (changes in direction) as possible, and the wire shouldn't make a hard "right angle" turn. It should have a six inch or so radius to the turn.

Lightning can jump out of a right angle bend in a ground wire to another wire or piece of equipment. For that reason, you never want to have unprotected pairs on the same block (like a 66 block) as protected pairs.

The phone company is supposed to put in lighting protection before the phone lines enter a building. This is usually the cheapest form of lighting protection, usually sufficient to protect a user talking on the phone in a lightning storm (not a great idea) on an old non-electronic single line phone (like a 2500 set).

Unfortunately the phone company ground is often missing, not connected, or otherwise just bad - so you shouldn't count on there being any protection at the phone company's Network Interface. There's nothing you can do to fix that ground yourself (unless it's obviously just not connected somewhere). The phone company may come out and check it for you if you ask them, but the technician may not know how to check it anyway?

You do want the phone company's lightning protection to be working since there is a possibility that the lightning would get into the walls in the building and start a fire - which was why lighting protectors were originally put on phone lines entering wooden structures over a hundred years ago. They probably saved quite a few humans from getting toasted talking on the phone through the years, too.

In the old days a cold water pipe was considered the best ground. That was because the metal water main was buried in the earth before it got into the building and continued uninterrupted anywhere in the building that there was cold water. Hot water, gas pipes or fire sprinkler systems were never a good choice since there could be equipment insulating the pipes before the pipes go into the ground.

Since the development of PVC plastic pipes, cold water is considered a horrible idea even if the pipes you can see are metal, since at some point it could make a transition to or from metal / plastic. Plastic will never conduct electricity well enough to give you any kind of ground.

A bad ground could easily be caused by someone doing work in the building and disconnecting the ground anywhere along the run. You just can't assume anything with a ground.

So what will happen if you have a bad ground? You could have strange problems with telephone and computer equipment, but the most expensive thing could be if the surge continues through your lightning protector into your electronic equipment, blowing it up.

If you have good lightning protection and your stuff keeps getting blown up it's time to start getting your ground checked out.

If the electronic equipment is too far from the main metal electrical panel, it may be better these days to use the third prong ground in an outlet. To do that, you need to test the outlet with an outlet checker.

If the outlet tester says your ground is OK, the green wire coming from the electrical panel to that outlet may be the best way to get a ground to a lighting protector? 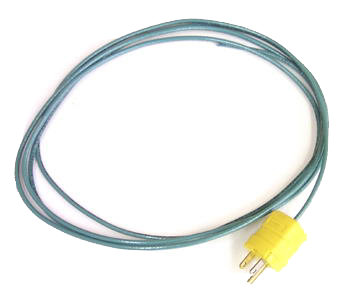 We manufacture two versions of a special 10 foot ground wire. It has a yellow 3 prong plug, with a green #12 or #10 ground wire.

You definitely don't want to plug it into a power strip. Plug it directly into the outlet. You want as little resistance as possible to get the surge to earth.

Without a good ground on the outlet a computer type surge protector or battery backup isn't going to give you much AC protection. Since your phone equipment connects to both AC and the phone or data lines you want to to protect all of those connections.


Static electricity is a problem in the winter all over the US. Without a good ground on your phone system or computer equipment the high voltage static shock has to go through your equipment to get to the power line, which is the closest thing to ground.