Make a Fax Machine work on a VoIP ATA or Gateway

Can you make a Fax Machine work on a VoIP ATA or Gateway, and
How can you Tell Who's Telling the Truth on the Internet?

Also an Update to the Avast Anti-Virus Suggestion from Last Month...

Can you make a Fax Machine work on a VoIP ATA or Gateway?

VoIP is made for voice. Music and tones don't get from end to end very well because of compression and delay. With voice or even music, if it's somewhat distorted you can often figure out what's being said because you're smart.

VoIP has a protocol that was implemented years ago to make DTMF work most of the time (after they found that DTMF digits didn't work too good).

When you send a DTMF tone via VoIP to a computer listening for DTMF tones at the other end (like an auto attendant), if the tone is distorted the computer isn't going to be able to decode the tone accurately. Sometimes it will work, and sometimes it won't. When the audio tone is sent from end to end that's called inband audio.

The fix is VoIP protocol RFC2833 (or the newer RFC4733). These specify a method for turning the inband audio tones (DTMF digits) into data that is received instead of the audio at the other end. The data is sent in a different type of packet (not an audio packet) to where the VoIP call is put on the PSTN gateway to the Public Switched Telephone Network.

All modern VoIP devices have an option that is programmed by the installer to use either inband audio or RFC4733 (some times the choice "Auto" works fine).

Even if you use RFC2833 there are still sometimes problems with DTMF digits. The #1 reason is that the VoIP devices have to be smart enough to remove the inband audio when they send the data. If they don't remove the audio packet for that DTMF tone you get a double digit. These devices are pretty smart but sometimes they leave a trace of the beginning or the end of the DTMF digit audio, which gets decoded as audio in addition to the data sent (resulting to a double digit).

This works in both directions if RFC2833 is turned on in the VoIP device (incoming and outgoing), so the digits it's receiving are treated the same way as digit it's sending.

With faxes the closest thing is the VoIP T.38 protocol which does away with inband audio entirely, sending the whole fax as data to the other end. It's pretty finicky and might or might not work on any particular call unless the devices at both ends are VoIP supporting T.38.

Some VoIP ATAs turn off any compression for calls when it detects a fax, which is called g.711 Bypass.

That also works, sometimes. It's just plain tough getting uncompressed VoIP audio packets from end to end on every VoIP call reliably (with no latency and no lost packets). The fax protocols that every fax machine already uses for POTS calls work OK to correct the data being sent by the fax machine over VoIP, but not 100%.

Since fax machines will usually try to send a fax three times before giving up there's a reasonably good chance the fax will eventually go through on one of the three tries. But not 100%. Lots of wasted calls and minutes.

I get a lot of calls from companies whose lease is up and they're getting brand new fax machines. They're putting the new fax machines on the same VoIP analog ports (gateway or ATA) that the old machines worked OK on.

In most of these cases the old fax machines worked OK but the new ones (even a newer model from the same manufacturer) don't work often or at all.

The fax machines may not be working for a bunch of telephony/electronics reasons. Loop current, talk battery, db loss, common mode noise, an impedance mismatch, etc. Sometimes it can be made to work through a lot of trial and error. Sometimes not.

Sometimes there's no option to keep the old fax machines that were working OK because they're too old for the vendor to continue servicing (no parts or support is available from the manufacturer). Even if the leasing company will let them buy out the lease at the end.

The obvious answer is to keep analog lines for the phone company for faxes. And maybe share them for the alarm systems and credit card terminals.

When I tell companies to keep their analog lines the customer usually won't do it. Mainly because the salesman for the VoIP stuff told them that they could get rid of all their phone lines... And they might have reallocated the money they saved (like into a new car, couch or drapes for home?).

In some areas the telephone company may have removed the copper to the premise, or just won't install lines on copper anymore.

A reader (macphoneguy) sent me a message that he got one fax machine to work on a Multitech Gateway (a multi-line ATA) by increasing the loss on the gateway's port from -5db to -19db (per Multitech's support).

He mentioned that the fax machine isn't heavily used, but the faxes went through 100% of the time for him after he made the change.

That's a huge amount of loss, and that amount can only be done digitally. You can't put that much loss in it using an analog device (like our Modular Attenuators) because it would reduce the loop current too much (but we have all kinds of gizmos that fix different specific problems with phone lines).

He said if that change hadn't worked he would have tried other options in the gateway to see if any others helped.

He said the instructions for changing the fax volume are on page 23 of the Multitech manual:


By the way a good service for sending and receiving faxes by PC is Green Fax:

There are a whole bunch of terrible fax services out there but this one seems pretty good. We've had an account with them for about 6 years.

Remember that just because a salesman tells you that something can be done, or you see an ad on the Internet for something, doesn't mean it actually will work! Checking references is more important today than ever.

Which brings me to the next topic of this month's blog...

I created a new phone company one afternoon (click on the ad to see how good a deal it is):

It's hands-down the best deal on the Internet.

The only problem is that it's a scam. It's not real. I could do everything it says in the ad right from my kitchen table. I'd give bad service, but we've come to accept bad service as the norm more often than not.

If you have a customer who is thinking of jumping ship for some great deal they saw on the Internet you might want to point them to the 9X9 Central website and make sure they read the About Us page.

Just because you can do something, doesn't mean it's a good idea!


Update to Last Month's Suggestion to use Avast Anti-Virus

Last month I recommended that if you aren't going to upgrade your XP PC this month, and are using Microsoft Security Essentials (which will stop being updated next year), you try Avast FREE Anti-Virus (only the FREE version!).

I said that you would have to put up with some ads they recently put in the Avast FREE (and not to get the paid version). It turns out that if you do a custom installation you can choose whether to install Software Updater, SecureLine (VPN) and GrimeFighter (I have no idea what GrimeFighter does, but it's very annoying).

GrimeFighter seems to tell me that it found lots of grime on my PC. It doesn't say what the "grime" is. I don't recommend letting ANY program automatically make changes to your PC!

In the case of GrimeFighter even though it seems to be installed and telling you how much grime is there, you can't actually use it until you pay for the upgraded program (which I don't recommend because you have to use Digital River to pay for it in the US, which has lots of bad comments on the Internet).

Even if it's free there are no "registry cleaners" or "PC cleaners" out there that will do a good job on every PC (might work for some?).

They aren't safe to use unless you make two complete backups of your PC to two different hard drives so you can restore your PC if you lose programs or data you really need. No geek who writes these types "cleaning" programs could possibly anticipate what we need on all our different PCs.

If you already installed Avast FREE you can go to Control Panel, Add-Remove Programs, look for Avast, and click on change. You'll get this screen where you can uncheck Software Updater, SecureLine and GrimeFighter (the yellow boxes below), then reboot your PC. 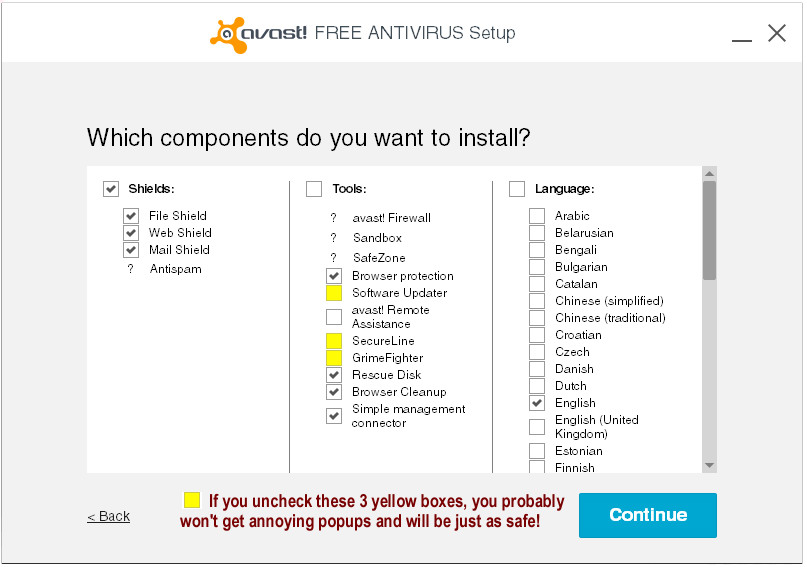 For making an image backup of your Windows PC to another hard drive I recommend Drive Snapshot (from a German company):

As of this writing it's about $54 US (39 euros). It does have a 30 day trial where you can test it. I've been using it for over a decade on the machines in our office and my home.

It makes a complete image of the Windows PC, including data and programs as of that moment. Restoring from an image is a lot faster and easier than reinstalling and re-registering all of your software! When you restore the image the PC is exactly like it was the moment you made the backup.

I backup the data directories every day so I can restore them after I restore the Drive Snapshot image (which is older). I only do an image backup every couple of months since I don't install many new programs.

I make my backups to 1TB and 500GB USB hard drives. So far it's been totally flawless, but I always have at least three copies of the image backups for every machine (made at different times). Keep in mind that having one backup of anything is not safe. Three is best, and taking one of the three USB drives off-site makes a lot of sense in-case of a fire.

When you use Drive Snapshot to make an image of the PC be sure to check the box to verify the backup when it's done. Drive Snapshot lets you restore files as well as the whole image.

If you use a credit card you have to use Digital River to buy Drive Snapshot, so I don't recommend that. But you can pay by Paypal, bypassing Digital River on the ORDER page at their site.