This one stumped me!

I got a call last month from an Interconnect installing new VoIP phone systems at a bunch of locations where there were trunks coming in from nurse-call systems. The analog station ports from the nurse-call worked fine on their old phone system trunks.

The new VoIP phone system uses a Gateway for four loop start trunks coming from the station ports on the nurse-call.

They can swing a real phone line into the Gateway (instead of the nurse-call) and they can access it on the new VoIP phone system just fine. Put the station port from the nurse call on that same port on the gateway and there's no dial tone.

This is really strange... When he put a banjo (butt-set adapter) in-series with the mod cord going into the gateway, the VoIP phone system draws dial tone from the nurse-call system just fine. With no butt-set or anything else clipped to the banjo. Take the banjo out (plug the mod jack directly into the gateway) and the VoIP system can't draw dial tone. His butt-set and even a regular analog phone always gets dial tone from the nurse-call just fine.

A banjo is just a plastic box with some metal tabs on the side to clip butt-set clips to. It usually has two mod jacks, in and out. The two jacks are simply connected together inside the banjo, usually by soldering a wire from each jack to a single metal tab. There's a short mod cord coming out of one jack to make it an inline, male to female modular adapter.

He had a couple of different brands of Banjos with him. With either one in-series with a mod jack on the gateway (any of the four ports) he could draw dial tone from the VoIP phone system. Without a banjo in-series, he couldn't draw dial tone. This was at over half a dozen totally different premises many miles apart, with the same equipment at each. The VoIP phone system couldn't draw dial tone from the nurse-call at ANY premise unless a banjo was in-series with the modular port on the gateway.

I worked with the tech for over an hour and couldn't find a solution except for him to get a bunch of banjos!

He actually did have one problem with his installation that I was hoping would fix his problem. He put his own mod plugs on a CAT5 cable punched down to a 66 Block at the other end, going into the four ports on the gateway. I asked him to look inside the mod plug where the pair came into the plug, and tell me whether the opening was a rectangle - or whether one side of the rectangle was curved. He said it was a rectangle, that no sides of the opening were curved. 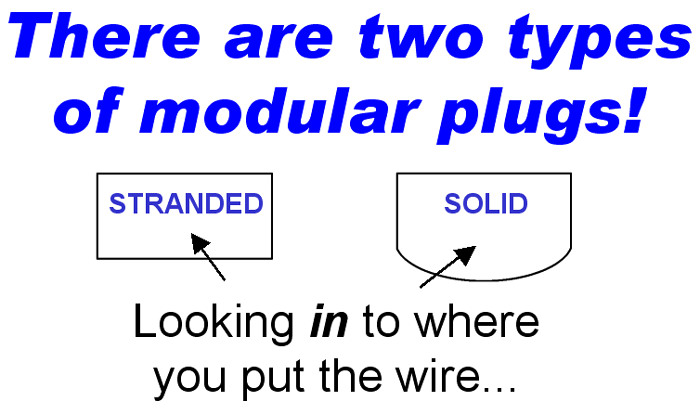 Ah Ha! He was crimping mod plugs made for stranded wire onto solid wire CAT5 cable. Stranded plugs won't work on solid wire because the pins that crush down on top of the cable have two little points. These points go through the insulation and rub against multiple strands of stranded wire making a good connection...

BUT, when you take those same two little points and crush them onto the top of solid wire, they don't have any place to go but bounce straight back up when the crimp tool is removed - away from the wire. This gives you an intermittent connection that causes really strange symptoms, forever.

On modular plugs made for solid wire there are either two or three pins that slice down on either side of the wire, making what's called a "gas tight connection" that won't allow corrosion to form. On solid wire plugs with two pins you'll see that the two pins are offset slightly. One offset to the right and one to the left. When the crimp tool crushes the pin into the top of the wire, one pin slices into one side of the wire and the other pin slices into the other side of the wire. Because it actually digs into the side of the copper wire, the pin won't come back up when the crimp tool is removed (like it would using a stranded plug on solid copper).

In this case the tech didn't have any solid wire plugs so he cut a silver satin mounting cord in-half, stripped it, and beanied the two wires onto the CAT5 cable. Beanies have lots of little spikes inside that dig into the sides of solid copper, which also creates a gas-tight connection. Slicing into the sides of the wire is the principle behind Insulation Displacement Connections (IDC), like 66 and 110 punchings, and UY/UR/UG connectors (Scotch Locks).

Unfortunately, after using the silver satin mod cord beanied to the CAT5 he still had the same problem.

He did mention that if he used a 66 Block to Modular Adapter (Testar 2) on the nurse-call block, going to a modular cord plugged directly into the gateway, the phone system could draw dial tone from the nurse-call system.

There are very few times I get stumped because I know that absolutely everything can be fixed. But this was just too strange!. I have no idea?!?