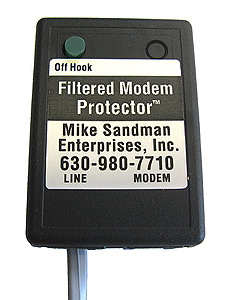 Loop Current is the amount of electrical energy flowing through the telephone and line. Many telephone companies are using special pair gain equipment (called SLICs - Subscriber Line Interfaces) to bring phone lines to neighborhoods. These SLICs are made to allow the phone company to serve subscribers as far away as possible without further conditioning the lines. They put out tons of loop current - enough to destroy many modern telecommunications devices. Even new Central Offices themselves are being made to put out as much power (loop current) as possible to serve customers far away from the CO. If you happen to be near the SLIC or CO, watch out!

The specs for maximum loop current were developed in the 70's before the advent of all of the new electronic telecommunications products. Even though the phone companies know the high loop current is damaging subscriber equipment, they're using the old specs to their benefit to serve subscribers far away from their COs, without having to add more equipment to their lines. The more current, the farther you'll be able to use the phone line.

Nobody seems to be interested in changing the old spec, and modern equipment manufacturers seem to ignore the spec and pretend the problem's not there. The Modem Protector™ has been designed to fix all problems associated with high loop current. It's a quick and easy fix to many of the problems encountered with modern telecommunications equipment caused by high loop current.

Is this something new? No. We've sold lots of Loop Current Attenuators to phone companies who use them to prevent strange problems with telephone equipment and modems. The Loop Current Attenuator has a series of dip switches, which a technician flips while watching a loop current meter. When he finds a combination of dip switches that brings the loop current between 23 and 27ma (the ideal setting), he just leaves the device there on the line. If the loop current later changes on the line, the technician needs to go out and manually set the dip switches again. Our Modem Protector™ handles all of this automatically. It keeps the loop current at a constant 25ma, and also includes surge and lightning protection, and a polarity indicator (some modem manufacturers claim that you can get better speed by using the correct polarity).

PCMCIA (PC Card) and built-in laptop modems seem to take a real beating from high loop current problems. It not only messes up fax and data transmissions, but it blows up modems! Take a look at this chart, and you'll see why:

This graph shows the amount of POWER that a modem must dissipate just to keep the line off-hook.

That power is ALL converted directly into heat that a modem must somehow dissipate. It's virtually impossible for a PCMCIA card or internal laptop modem to dissipate 2 watts under any circumstances. The Modem Protector™ automatically extracts the heat that can burn up your modem.

It turns out that according to sources at an FCC testing lab almost all new faxes and modems and some new telephones use a device called an OTA (operational transconductance amplifier), a special type of op amp with a small capacitor to simulate the inductor that would normally absorb the loop current in a telephone. Why? Because they're smaller and cheaper than using real inductors. They look like any 16 pin IC chip, and have the same power handling limitations as IC chips. The best OTA can handle 0.57 watts - about in the middle of the above chart. Any closer to the phone company CO or the PBX, and the OTA will fail. This limit translates to roughly 40 to 45ma of loop current. The Modem Protector™ automatically reduces the loop current on its output jacks to 25ma, no matter how high the loop current. If the loop current is at or below 25ma, there is no effect on the loop current. In any case, surge protection is provided within The Modem Protector™. For lighting protection our Modular MLP-270M Lightning Protector will give you the maximum lighting protection possible as long as you provide it a good ground.

Notice also that the effect of distance is not linear. As telephone lines get shorter the power increases substantially. This explains why many problems occur with modems plugged into PBX extensions, which often have short runs.

IBM was marketing a device called the Modem Saver™ for a while. It was a little pen shaped device that you plug into a jack with indicators for the polarity of the line and if the loop current is too high. Unfortunately, the warning doesn't glow until about 90ma. At 85 ma, it's unlikely you'll be able to transmit data reliably at any speed, and you may smoke your modem, but the warning light won't be on. I have no idea why they designed this product like they did? As you can see from the above chart, The Modem Protector™ doesn't need to warn you of high loop current because it just takes care of the problem for you.

The Modem Protector now adds a Modem Filter™ to reduce common mode noise on the line that may interfere with modem transmissions. Common mode noise comes down both sides of the line (the tip and ring). Because it's equal on both sides of the line, you don't hear it with a regular telephone, but the modem will hear it because it is referenced to ground, and not perfectly balanced, and the data can be slowed or you'll have connection problems. Because the Modem Filter™ section of the Modem Protector™ is an inductor, it also helps to stop spikes on the phone line from getting to the modem or phone equipment attached to it.