When I say hum I'm talking about a 60 cycle hum or buzz (or more likely a harmonic of 60 cycles), which is a pretty low frequency.

You could be hearing a higher frequency buzz or a tone, which is often caused by RFI.

Or the noise can be induced interference from other pairs in a cable, or a cable run parallel to a power cable (which would usually be 60 cycle hum). Data noise from something in the same or tie-wrapped to a phone cable could be causing a problem?

Induced AC power onto a low voltage audio pair can be measured with a meter. I'll talk about that in a little bit.

Hum is caused by one of three things:

1. An imbalance in a cable, where the tip side of the wire is longer than the ring side. In telephony both of the wires coming from telephone equipment or the phone company have to be exactly the same length.

2. An imbalance in AC powered telephone equipment, where one of the two wires for the phone line is closer to ground than the other (which creates an imbalance on the whole line).

3. EMI (from a nearby piece of equipment), RFI (buzzing or hum is usually an artifact of analog TV if you're near a TV station antenna, but there are very few analog TV stations left out there), or crosstalk from an adjacent pair of wires in a cable.

Other things to look at:

AC voltage on the line (should be less than .5VAC from tip to ground and ring to ground), which would only cause a hum on a line with an imbalance when the phone or device is AC powered (has a reference to ground through the power plug and/or a ground cable). 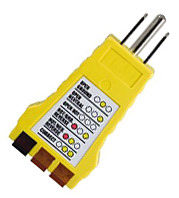 Is the AC Outlet Wired Correctly?

If the AC outlets are wired wrong it's likely that you'll get some kind of ground loop, or an imbalance will be made worse because the engineer who designed the device assumed the outlet would be wired properly.

Always carry an Outlet Checker and use it to check the outlet! It could save you hours of chasing your tail!

Do You Have  Ground Loop?

If the ground in the building is bad you could really chase your tail. You might go outside to make sure there's a wire connected to the ground rod(s) that is going inside the building (usually on the opposite side of the wall from the electrical panel). Electricians have been know to forget to connect it to the ground rod.

If the equipment has a separate ground, not just the 3rd prong on the AC plug, you could try disconnecting that to see if it helps your problem. While it may not be safe to leave it that way on some equipment, it's OK to do it for troubleshooting.


Here's the proper troubleshooting for hum:

If you skip any step you could chase your tail for a long time...

Don't assume anything!    (You can guess how I know that)

1.  Check the pair for each line you hear hum on with a butt-set from the demarc (either the phone company, or the phone system station equipment / ATA) for hum with the line disconnected from the equipment.

If you hear any hum at all on your butt-set, when the equipment is connected it's likely to make the hum worse because the equipment has a reference to ground.

Keep in mind that anything you hear on the butt-set in monitor mode (not off-hook) is pretty much meaningless. A phone line or station port must be terminated by a phone for any noise faults to be diagnosed. When the butt-set is in monitor mode and you're not listening to a conversation or whatever while another device is off-hook on the line, you are likely to hear hum and noise that just doesn't mean anything.

If you hear hum, even a little, you must fix it or get it fixed. It ain't going to get any better when you connect your equipment, and it will likely get worse because of the equipment's reference to ground through the power cord.

Remember that lightning protection diverts the tip and/or ring to ground when there is more voltage than the protector is rated at. There are some really junky lightning protectors, especially with MOVs (Metal Oxide Varistors) that eventually go out - shorting one or both sides of the line to ground. Jump around any lighting protection / remove the ground temporarily to make sure that's not your problem!

The easiest way to eliminate crosstalk from adjacent pairs or a cable tie-wrapped to a power cable is to run a CAT5 on the floor between the two ends of the permanently installed cable. If the hum is gone on the new cable laying on the floor, it's time to take a look at the permanently installed cable, or install a new one (preferably in a different route).

If you can see that all the cables from the frame go right over a welding machine or X-Ray / MRI machine of some kind, I'd suspect that machine. Have them operate the machine to see if the problem occurs, and that it's gone when the equipment is powered down (this is usually EMI or RFI).

You can listen for the hum when they run each machine, one at a time. Until you identify the cause of the hum, you have no chance of fixing it.

It's very unlikely you'll be able to get rid of EMI caused by a machine of some kind. Re-running the cables may be the only fix?

If it's RFI, we have filters for phone and Ethernet that covers interference from .5mhz to 150mhz, but some equipment could be causing interference at a much higher frequency than that.

2.  If the lines aren't the cause of the hum it's time to take some voltage readings. If there is more than .5VAC from tip to ground, ring to ground, or tip to ring, you need to eliminate it. See our Longitudinal Imbalance Tech Bulletin for information on measuring the AC, and eliminating it if you find more than half a volt. Be sure to read the note in that Bulletin that most meters can't read AC on a phone line correctly.


3.   If there's less than half a volt of AC on the lines it's time to start checking for a ground loop. The first thing to try is to reverse the tip and ring on one end of the pair (phone line, CO trunk, paging amplifier, etc.). A ground loop is pretty common between audio paging systems, amplifiers, pre-amps, etc. and phone equipment (either a page port, station or trunk level paging).

If reversing the tip and ring didn't fix it it's time to eliminate a problem caused by a ground or the AC in the building. Get out your outlet tester and make sure the electrician wired the outlet correctly, and check the outlets on the battery backup. Whatever stone you leave unturned could cost you a lot of time.

If there's a ground connected to any of the equipment (separate from the 3rd prong AC ground) remove it temporarily. If it gets rid of the hum you have a bad ground somewhere or a ground loop of some kind. Time to call an electrician. All grounds on all equipment need to be the same.

If removing the ground didn't fix the hum it's time to run the stuff on a battery with the AC disconnected (which also disconnects the 3rd prong ground). If your stuff doesn't have a battery backup bring out a charged up battery backup from your office to use for testing. You'd need to do this on every piece of equipment connected to the system that uses AC.

If you forget to run the the paging system, the automated attendant or anything connected to AC on battery (or disconnect it entirely to see if the hum goes away) you're wasting your time. One little doodad connected to the system could cause a problem, including an Ethernet switch if the system supports VoIP, your POE devices, or a power cube attached to a phone that isn't using POE. Forgetting to disconnect one thing can make you think the problem is unfixable, when it's probably not. 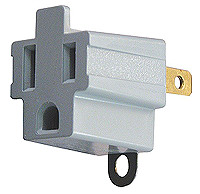 It might be handy to carry a 3 Prong Adapter which will let you run something with the 3rd prong ground disconnected for testing.

But it's probably a better idea to run everything on a battery backup since then you know there's no interaction with the AC power / neutral.

On an alarm system, which could be contributing to the problems, you could disconnect the RJ-31X so the panel is not connected to the lines. If for some reason there is no RJ-31X pull the power cube from the AC outlet so it runs on battery, and make sure there's no separate ground run to the panel.


4.  If you ran everything on battery, removed the grounds and swapped tip and rings at one end of every pair, it's time to look for EMI or RFI produced by something locally.

If the problem is just in one office or one area it's time to start turning off everything AC in the area. That would include computers, monitors, fax machines, copy machines, radios, etc. The easiest way is to just run your system on battery while you flip off all the breakers (got to do that after hours!).

You can start by turning off one gizmo at a time, but it's usually best just to have the customer shut down all his stuff in an orderly manner and then kill all the breakers or the master to the building. You have to shut off all the computers. Leaving one on, even backed by battery, could be causing the EMI / RFI.

There could be stuff like fluorescent and neon light transformers that are powered and you don't know it, and you won't know they're still on unless you kill the breakers / main.

Transformers sometimes let out a ton of EMI. I've seen some phone systems that were in the utility room of a building and there was a HUGE transformer humming away in the room (3' square mounted to the concrete floor). At some point you've got to shut that down and run your stuff on battery to make sure that transformer or something in the building isn't causing the hum.

Radio and TV stations are an unlikely source of hum. I wouldn't consider that unless there's a big TV antenna on top of the building. TV antennas need to be up very high, but they are short, so they like to put them in metropolitan areas on the tallest buildings around.

Or maybe if you're right under some kind of antenna. You may be hearing data noise from data being sent by RF?


There's pretty close to a 100% chance you can fix the hum, but it could be a lot of work.

There's just no easy way to do it.