I hear that complaint all the time. There's a lot of confusion about what causes that trouble alarm. This Tech Bulletin should explain it.

The customer decided to share the phone line(s) for the Fire Alarm Panel with the regular phone lines used at the business. Depending on the particular type of fire alarm, there may be one or two lines.

When the engineers designed the fire alarm panel they assumed you would have dedicated phone lines, as I believe is required for a UL Listed Fire Alarm (usually required in hotels and places where there are a lot of people that can get killed in a fire).

For whatever reason, most of the engineers seem to have chosen about 5 volts as the trigger threshold for the telephone alarm fault. Since nothing in electronics is exact, including the meter you read the voltage with, the phone line trouble alarm could get triggered by 4 volts or 6 volts.

The problem only occurs when someone goes off-hook to talk on the phone line that's being shared with the fire alarm panel.

Want to get rid of the problem right away?  Stop sharing the phone line with the alarm panel!

People think I'm an idiot when I tell them that since everybody is looking to save as much money as possible. Saving money is always good when it makes sense, but screwing around with the fire alarm, doing something you're not supposed to do, can put your company out of business when a fire breaks out and someone gets hurt. There are a lot of lawyers out there just looking for something to do.

Important... The fire alarm panel doesn't throw a telephone line fault alarm when it's going off-hook to make a test call or report a fire because it's not checking for the voltage then - it's just trying to make the call.


It only checks the voltage of the phone line when the alarm panel is idle, at whatever frequency the engineers designed into it (every 5 minutes?).   When the alarm panel goes off-hook, it automatically disconnects any phones connected behind the RJ31X jack.  By the way, you must have an RJ31X jack if you're going to share the lines with an alarm system.  The RJ31X allows the alarm panel to disconnect the phones from the line when it's trying to make a call so the line won't be busy - even if a phone is accidentally left off-hook.

Again, if you don't share the fire alarm's phone lines with your phone system and try to talk on them, you won't see the phone line trouble alarms.

OK. So you need to save the money and humans are infinitely replaceable. All you have to do is something to prevent the off-hook voltage on the phone line from dropping below 6VDC (or so) while you're talking on it.

After trying to boost the loop current and off-hook talk battery, our engineer came up with a much better/easier/cheaper solution. It turns out that our Loop Current Regulator™ will drop the off-hook voltage by 6 volts if you put it in-front of all the phones.

That means that if the normal off-hook voltage is 4VDC while talking on that line, and you put the Loop Current Regulator™   in-front of all the phones (or the phone system), but not in-front of the alarm system (from the phone company CO), the fire alarm panel will see 10VDC when you're talking on the phone... which is over the threshold to trigger the phone line trouble alarm (6V), so you will never see that fault alarm again .

If you don't understand this, there's not much else I can say (please don't call me!). Just put a Loop Current Regulator™  in-front of the phones, but not on the pair going into the RJ31X from the phone company. If you don't know what an RJ31X is and how it's wired, you definitely shouldn't be messing with this stuff. 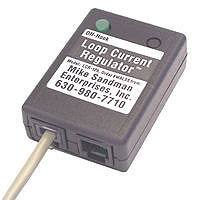 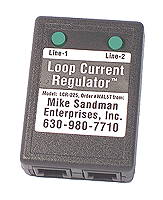 Wondering why you're seeing this problem?

The alarm panel engineers could just as easily have chosen 2 volts, and you wouldn't be seeing this problem - but they didn't know just how driven people would be to save money these days when they designed the alarm panel.

Since fire alarm panels are tested and approved by UL, no changes can be made on them after they're UL tested without the alarm manufacturer paying UL big bucks to retest the panel. Not a trivial task for a fairly complex gizmo that's made to save lives and property.

This isn't the only telephone problem I hear a lot about,
with both fire and burglar alarm systems.

The customer doesn't even consider that they use phone lines for other things than voice - like faxes, modems, credit card machines, automation systems and fire/burglar alarms. VoIP phone companies tell them that they're a phone company, and the customer believes it... because they figure every phone company has the same kind of phone lines. Cheaper ones are just better.

The VoIP or T1 salesman doesn't tell you the shortcomings of what they're selling. They don't have to until you ask - and you have no idea what to ask until you've gone through this and have experienced the problems yourself.

Even if your real phone company or phone system vendor told you what could happen, you wouldn't believe them anyway. Most of us have to learn the hard way.

So a short time after the new lines are installed, either VoIP lines, cable company phone lines, a T1, or CLEC (Competitive Phone Company) phone lines, you get to see the problems first hand.

Maybe you don't find out until you go to set the alarm and it throws a communications error because it can't call your alarm company (if you have openings and closings).

Maybe you'll find out when you come in in the morning, and the alarm says something like "Communications Error," which occurred when the alarm tried to make a test call at midnight. About that time your alarm company will call you to tell you they didn't receive the test call last night. Then you start to sweat.

You already had the real phone lines disconnected. There's no going back easily, cheaply or quickly. You call your phone system vendor. You call your alarm company. They laugh at you because it's the third call they've gotten like this, this week.

At that point whatever happens you'll be paying T&M for someone to try to straighten this mess out for you. And you thought you were going to save money?