Extending a T1 a Long Ways into a Building or Campus


I've gotten a lot of calls recently about putting a T1 line deep inside a building, or in another building on a campus.

If it's a new installation you're definitely better off paying the phone company to install the SmartJack next to your equipment. They will either run their own cable or often put it on existing cable (most installers are looking to make it as easy on themselves as possible). 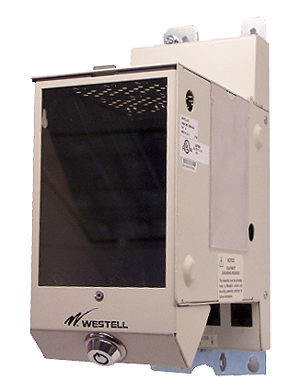 
Technically, from the SmartJack to the equipment you should run special T1 cable which is two 22 or 24 gauge pairs individually shielded, with another overall shield:

T1 Cable with Blue and Orange Individually Shielded Pairs, along with an Overall Shield


There's supposed to be a limit of 655 feet after the SmartJack, but just like CAT5's 100 meter limit - it will sometimes work fine with more cable. How much more? You're a test pilot and the only way to find out is to try it at that particular premise.

A lot of guys use CAT3 house cable or four pair CAT5e cable from the SmartJack to the equipment. It will work, but at some point it won't work anymore. How far? You have to try it in your particular installation to find out.

Crosstalk between the pairs after the SmartJack causes problems. As does Alien Crosstalk from other T1s or stuff the cable runs parallel to. That's why each pair of real T1 cable is individually shielded, and then there's an overall shield. They also make multi-pair T1 cable where all the pairs are individually shielded with an overall shield so you can run one cable for multiple T1s.

The cable before the SmartJack can be just about anything the phone company uses for POTS lines. With T1 a repeater needs to be installed by the telco every X thousand feet, depending on how the T1 is delivered. It could be on one pair or two pairs to the SmartJack.

If you tell the phone company it's going 4,000 feet past the NID into your building, and that's where you want the SmartJack installed, they will engineer the circuit with right number of repeaters to get it to work. Will they refuse to put the SmartJack where you want? Probably not, but it will cost T&M.

The problem often comes when you have to move a working T1. The phone company doesn't like your moving the SmartJack. You do have a little slop to move it some, but moving it a thousand or thousands of feet may kill the T1?

Likewise extending it thousands of feet past the SmartJack with any kind of wire will kill it at some point.

If you call the phone company to move a working T1 SmartJack the T1 line will likely go down at the worst possible time. It would be better if they just installed a new SmartJack where you need it and take the old one back, but you may not have that option. Whatever they do it will cost your customer.

I haven't used it myself but there's an extender you can use past the SmartJack that will work on one pair of just about any twisted pair wire you've already got installed in the building:


Use one pair of CAT3 or just about any kind of cable up to 18,000 feet between these boxes, and it extends the output of the SmartJack wherever you need it. You just put one box at the SmartJack, and the other at the equipment. Both boxes need power so they should be on a battery backup sized to keep them up as long as you need the T1 to stay up.

It's probably as cheap or cheaper than anything else you can do to extend the T1 from the SmartJack a long ways.

Patton has been selling these for quite a while. I talked to them to verify that it will work on CAT3 and they said it will. BUT they said that the chipset that's inside these has been discontinued by the chip manufacturer. That happens all the time to companies manufacturing electronic stuff. It's a reason that a lot of useful devices are manufacturer discontinued (it's expensive to redesign the product with different parts).

Patton said they still have a lot of chipsets available, but at some point they'll run out and they don't currently have an alternative product. If you do install this device, make sure you build spares into your selling price!

There is one other T1 extender currently on the market that uses two pairs of CAT3 (I haven't tried this one myself, either):


It looks a little harder to use than the Patton because it uses two CAT3 pairs, and they say it shouldn't be used on CAT5. You can put them in-series to keep extending the T1 by over 4,000 feet at a time (up to 5,000 feet using 22 gauge instead of 24 gauge, but there isn't much of the bigger 22 gauge cable out there these days).

The DCB T-Extender needs power so you need to put it on a properly sized battery backup. And since T1s are so critical to customers, you should stock spares.

You can also get an Ethernet extender if you need to go more than 100 meters.