If you're getting phone lines from a box of some type it's possible that you're reading this because your phone system isn't working right on that box - even if it worked fine on the old real phone lines or a box from a different provider.

You usually can't hear data noise. It's on frequencies above voice frequencies. But the computer(s) inside the phone equipment (all phone equipment is a computer these days), like single line feature phones, modems and KSU-less phones that don't need a central box to work, can sometimes hear the data noise and do strange things.

What strange things? It will be different with every piece of phone equipment that's susceptible to the noise. It just causes the computer(s) inside the phone equipment to operate incorrectly.

How do you know data noise is causing the problems? You don't. Until you put one of our Data Noise Filters in-front of the phone equipment to see if the problems go-away. 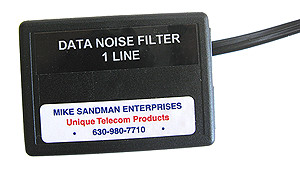 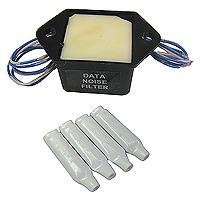 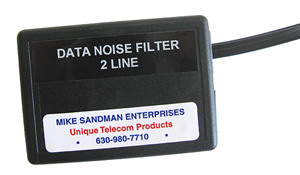 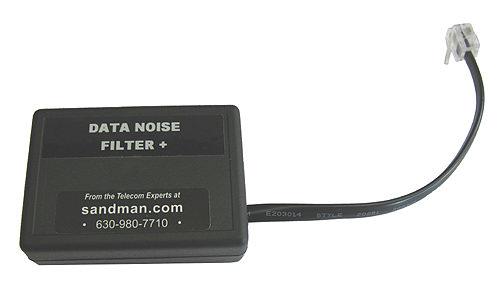 You can't hear, taste or smell the data noise. You can see it on an oscilloscope, but that's not easily hooked up in the field.

The Data noise is common mode noise. That means it's the same on the tip as the ring. So if you were to plug a standard single line phone into the jack on the fake phone line box you won't hear the noise because:

You need to carry them both!

There's no way to know which one will work until you try.

This isn't an exact science since all of the makes and models
of the boxes that provide fake phone lines work differently.


Data Noise can be coming down all of the lines...

Sometimes a particular phone line (like just Line 1) will bring the data noise into the phone equipment, and other lines won't. It depends how close the components or even the traces on a circuit board are to the components or traces going to the CPU.

Wired  KSU-less phones that you'd buy in the Office-Biggie or Biggie-Mart store like Panasonic, AT&T (which is really V-Tech), RCA / GE and other multi-line phones (2 or more lines) that don't need a phone system central box (KSU) to work together really don't like Data Noise on Line 1 . The lights or intercom won't work, the phones many not ring, or some other symptom may occur.

Cordless phones generally aren't effected because they communicate with each other by radio - not on the wire from the fake phone line.

KSU-less phones actually generate and use their own data on Line 1 above voice frequencies, so you can't  put a Data Noise Filter right at the phone on Line 1 (the line that's normally used to communicate between phones). If you do the lights, intercom and ringing will no longer work between the phones. 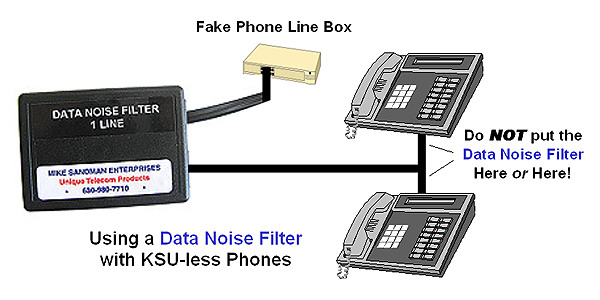 With these types of phones it's critical that you only plug the Data Noise Filter in at the box with the fake phone line , not   behind the phone or at the wall jack for the phone.


If you put the Data Noise Filter anywhere between  any of the phones, particularly on the first line, it will block the communications between the phones. Putting it right at the box will make sure it's not between any of the phones. 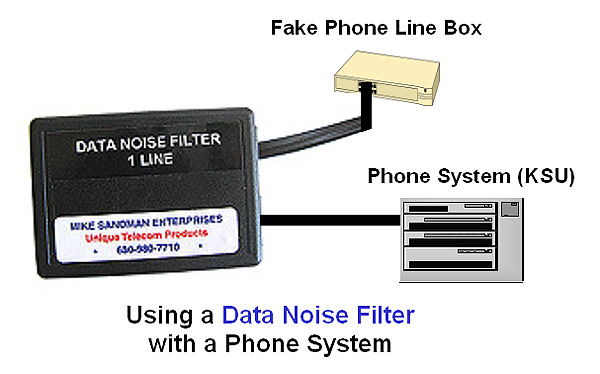 Which of the two versions of Data Noise Filters do you need for KSU-less Phones?

There's no way to know until you try one of them to see if it clears your problem.

You really need to carry at least one of each in your car or truck!


Click HERE to go to our Data Noise Filter Page