Is it Noisy? You probably don't need an amplified handset!


As one of the last companies manufacturing amplified handsets we get a ton of calls from people looking for an amplified handset. The first thing we ask is whether it's for someone who can't hear, or for a noisy area.

A good percentage of our customers don't know if it's noisy. They were just told to order an amplified handset, or maybe that's just what the customer requested.

The problem with putting an amplified handset in a noisy area is that it makes it harder to hear, not easier.

All phones sold in the last decade have a receiver amplifier built-in. Usually an up and down button on the base of the set. If it's noisy and you turn up the volume on the set, the background noise is increased along with the other party's voice. It's just as hard or harder to hear.

When you put a handset with a noise cancelling transmitter on the phone it cuts out most of the background noise. When the volume is turned up the person on the other end is easier to hear, not harder.

For those phones that we can't make a noise cancelling handset for we have a Volume Control Box to reduce the mic level if it's noisy (using a small screw driver to adjust a tiny pot). That's not a terrible idea since if it's noisy it's likely that the user will be speaking louder anyway. It simply plugs into the phone's handset jack and the handset cord plugs into it. It only works on phones with electret transmitters (either polarity), which is just about all of them these days.

Another option is to put in a different model phone. Maybe an older phone that we do make a noise cancelling handset for?

Most of our customers who have gone through this before know that if they sell a customer an amplified handset for a noisy area, the customer will probably return it. They already know to do a consultative sell when dealing with amplified handsets. If it's noisy they check with us to see if a noise cancelling handset is available before quoting it.

Not having an amplified or noise cancelling handset for the phones where it's needed has led to a lot of bad blood when a new system is put in. Sometimes the salesman didn't ask about it. Having to pull out a phone system and put the old one back makes for a very bad day (lots of our customers call us in a panic).

Be sure your salesmen ask about special stuff like amplified handsets when you're giving a quote on a new phone system. Call us to get the pricing and availability on what you're selling so you have your ducks in a row up-front, and don't have to panic later.

A lot of our customers get an amplified and noise cancelling handset. The benefit of both amplified and noise cancelling in a handset is that the user can raise the receive volume using their fingertips. They don't have to go back to the phone to adjust the volume. And on some phones when the handset is hung-up the volume that had been raised using the buttons on the phone returns to normal. With the amplifier in the handset, the volume level remains the same (set by the wheel) because the user doesn't adjust the phone's volume control.

For a technical explanation of how our noise cancelling transmitters work, click HERE. 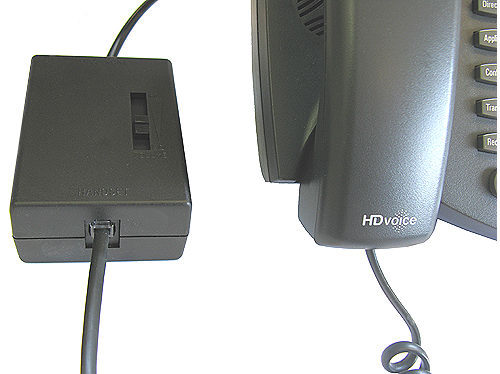 If the user wears a hearing aid, it would be a good idea for them to look at our Hearing Aid Compatibility Tech Bulletin . It explains what needs to be done to get the T-Coil in the hearing aid to work with the handset on the phone.

When the T-Coil is activated on a hearing aid the hearing aid's mic that's normally used to pickup sounds is switched off, which reduces the annoying squeal. The hearing aid then uses a coil of wire inside of it to receive the audio from the phone's handset by induction. Just like the old suction cup telephone recording gizmos from years ago.

Apparently it's needed on some phones (like Shoretel wall phones) and equipment where the normal length 8 Pin Plug interferes. This is the difference: 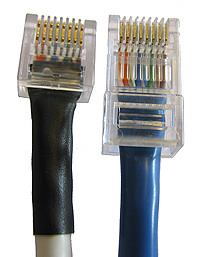 If you need a CAT5e Patch Cord of any length with these strange plugs, give us a call. We have regular CAT5e and CAT6 Patch Cords, too. As well as jacks, faceplates, etc.