How Do You Keep VoIP Packets from NEVER Travelling Over the Public Internet...
So They Always Sound Great?


Everything old is new again...

In the old days all phone calls calls were circuit switched, which means they had a dedicated pair switched-in on the route from the near-end to the far-end of the call. Calls essentially sounded perfect.

They sounded OK in the old days when circuit switched calls were amplified by tube type amplifiers strategically placed in the phone network. They sounded even better when the phone companies switched to TDM (Time-Division Multiplexing) and the calls were digitized between the central offices at the near and far end.

There is little difference between digitizing a call with TDM or VoIP packets. If there is enough bandwidth and the packets are routed properly from end to end, a VoIP call will sound just perfect.

There is some delay from end to end on VoIP calls because it takes longer to digitize a call with VoIP compared to TDM, but callers don't notice the small delay (unless they're in the same room).

The problems we see today with both VoIP calls and Video Conferencing are caused by packets being routed the wrong way from time to time, or more likely by congestion somewhere between the near-end and far-end where the pipe is congested with movies, YouTube, and other stuff that uses a whole lot of big packets that aren't time sensitive.

Although each router along the way and at the office itself could prioritize VoIP packets if it's programmed to do so (using QOS, quality of service), in practice once a pipe is about filled the router is just going to do the best it can to move the packets along however it can. And some routers, either at an office or out on the Public Internet aren't programmed (or aren't programmed correctly) to give VoIP packets priority.

VoIP packets are time sensitive since you can't buffer a phone conversation like you can a movie. Whatever packets don't get to the other end in a timely fashion are thrown away, making it hard to understand the VoIP call.

Each VoIP packet is tiny compared to most other packets on the Internet. The small size of VoIP packets helps the call sound better since if a packet here or there is lost the conversation is still understandable. A g.711 packet contains 10ms of voice, called the payload (10 millionth's of a second), way less than a word.

Most companies switching to VoIP are putting in a local VoIP PBX. They get SIP trunks from a SIP trunk provider, which is how calls are made to other companies. SIP trunks are just VoIP phone lines delivered over the Internet. It's the SIP trunk provider's responsibility to route the VoIP packets to where they're supposed to go. Both price and call quality varies between SIP trunk providers. A lot.

So here's what we've got now on a VoIP call from the office to a POTS line somewhere:

• Most offices share their broadband connection(s) with packets for VoIP and the Internet for all the PCs.

• Then the ISP (Internet Service Provider) sticks those packets on to a bigger broadband pipe (shared by all their subscribers in that area) from the CO to the Internet backbone (cloud). The VoIP packets ride along on that big backbone pipe, with each router telling the packets where to go next towards the destination.

• On a call to a POTS line the VoIP packets are routed to a POP (Point of Presence) where a gateway (multi-line ATA) converts the VoIP packets to analog voice, and the gateway makes a regular phone call to the far-end phone.

You'd think that it would be better to have a POP in the same city, but since long-distance is cheap a VoIP SIP trunk provider might only have a few POPs in the country where the VoIP packets jump on or off the Internet. If it's TDM from the POP to the far-end POTS line, it will sound just fine since the call is made on the PSTN.

The bulk of VoIP call quality problems aren't on the backbone. Those pipes are so big that they are likely less congested than a company's local broadband connection to the CO, or the pipe from the CO to the Internet backbone.

• The call is just a regular phone call from the time the call is made by the gateway on the phone company's line at the POP. The quality will essentially be perfect from the POP since it's just a regular phone call on the PSTN (Public Switched Telephone Network). If the VoIP packets sound OK when they are sent from the gateway, it has to sound good from there to the far-end POTS line. If the VoIP packets are screwed up when the gateway converts them to analog voice, they will stay screwed up to the far-end.

I'm mentioning COs (Central Offices) here because it's not a good idea to put VoIP packets on a cable, FIOS or Uverse Internet connection. Those broadband connections have a lot of competition (are shared) in the neighborhood by other types of packets. Sometimes there's more congestion than will work for VoIP, and it will be fine at other times. You have no way of controlling it.

Note that most cable companies, FIOS and Uverse avoid voice quality problems when they sell their own phone service by having their own private voice network. Some of those companies call their phone service VoIP because it sounds "hip," but it may not even be packetized VoIP. When they designed their networks they knew enough to make sure the voice calls never had to compete for bandwidth with movies etc.

Making every VoIP call sound as good as a POTS call simply requires a private VoIP Internet broadband connection and backbone that is just for VoIP packets (and Video Conferencing):

VoIP calls on a private IP network and backbone end to end aren't here yet (for most of us because we can't afford a private backbone), but it's getting closer. It will require a forward thinking CEO at a big ISP. Maybe one that's also a phone company, who already said they want to turn off all their POTS lines?

Here's what we need to do:

• The office puts in a separate wired Ethernet network just for VoIP. No more plugging in the PC to the computer port on the back of the VoIP phone. A separate cable from the wall jack at each workstation to a separate Ethernet switch (separate LAN). This isn't expensive and is usually easy to do.

• The dedicated Ethernet switch for the VoIP LAN is connected to a dedicated broadband router and connection sized to handle as many simultaneous calls as needed. Figuring 100K for download and 100K for upload for each simultaneous conversation is pretty safe. QOS isn't necessary on this router because there are no other types of packets for the VoIP packets to compete with. You still need a firewall since bad actors will be attacking that IP address, even after there's a 100% private VoIP packet network.

If you calculate the maximum number of simultaneous calls and revisit that number from time to time, your voice quality will be as good as it can get with anything under your control.

This is the part you can do right now. You need to do this whether you are using a local VoIP phone system (no Internet bandwidth for intercom calls needed), a VoIP phone system in a data center or a hosted PBX (where you just have the VoIP phones at the premise).

Many VoIP salespeople sell by telling the customer that they can get rid of their expensive phone lines and share the existing LAN and connection to the Internet. That's certainly cheaper, but call quality can be terrible if someone in the office is uploading a big file, or watching movies.

The better VoIP salesmen will figure out the broadband bandwidth needed for all the simultaneous calls, and make suggestions to the customer. When the customer says no (they need to save money) the salesman installs the stuff anyway, knowing that there will be voice quality problems after it's cut-over. Then the business owner has no choice but to spend more money on a bigger/separate broadband connection.

In general many customers don't take the suggestion to install a separate broadband connection for VoIP calls well. Just because you can do something, like share Internet bandwidth with VoIP and the PCs, doesn't mean it's a good idea!

• Once AT&T, Verizon, Qwest, Megapath, Level 3 or some other ISP starts to offer a dedicated VoIP broadband connection and dedicated VoIP backbone you'll have perfect sounding VoIP phone calls from end to end, unless you're calling someone at a home who's sharing their Internet bandwidth with VoIP. But most businesses will have dedicated VoIP connections after they see the benefits. It's going to be the norm, and a cost of doing business.

I believe that AT&T and Verizon are already offering private VoIP backbones, but for very large customers. Voxbone, a company selling wholesale SIP trunks says they have a private backbone just for large hosted VoIP providers, but it looks like they put any overflow over the Public Internet. Since large hosted VoIP providers don't have a dedicated connection from the customer to the private VoIP backbone, most of the benefits of a private backbone aren't seen by their customers. The bulk of the problems are on the local broadband connection, not on the backbone.

When IPSs eventually offer a dedicated VoIP network they will need special routers at the CO that throw away non-VoIP packets. That will prevent hackers from using the private network for anything other than VoIP. If VoIP voice packets are encrypted, detecting improper packets might be a challenge. But the ISP will be able to quickly disconnect a dedicated VoIP broadband connection that's being abused.

So eventually this is what will happen on every VoIP call between businesses (according to AT&T they want to turn off all the POTS lines today), and it will all sound as good as a POTS to POTS call today: 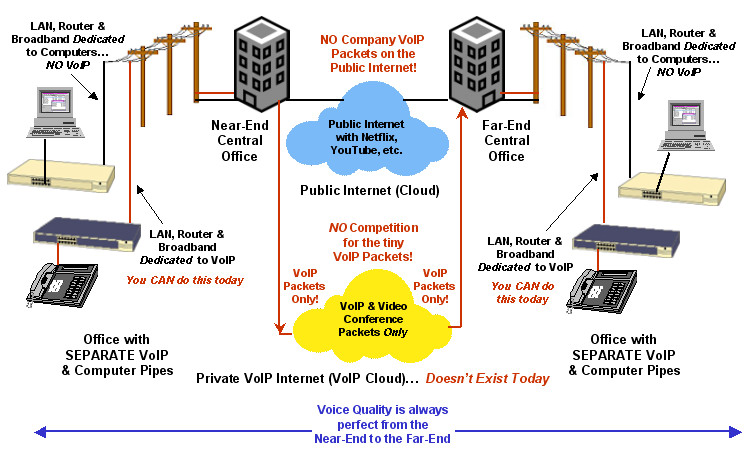 We're all learning this as we go.